Some artists that caught my attention at Art Liberating Lives 2009

This was an exhibition I attended the night before I left for Tokyo on the 15th of December, I could have posted this earlier as I'm just in the holiday mood but I don't want to leave it till next year. This was Sue Ryder Care's annual exhibition-Art Liberating Lives at the Mall Galleries-it was an uplifting and eclectic collection of works inspired by the theme, "Liberation".

Overall you could see artworks by established artists, available for auction, selected pieces from submitting artists, pieces created by their prisoner engagement programme and an entire room dedicated to works produced by people receiving their care.

It was a fund raising event which has been going on for the 4th year but this was the first year I discovered it and I was happy to take part-as I sold my piece "Art Therapy" on the opening evening of the private view and it was great meeting the lovely lady who bought the piece and the reason why she bought it. Most times one doesn't get to meet the buyer but this day was great! 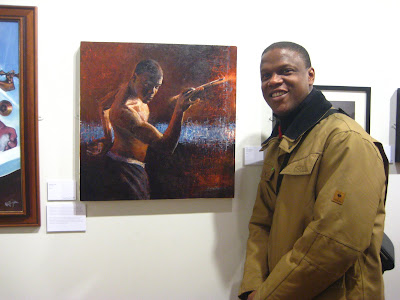 Each year Sue Ryder Care makes a difference to the lives of thousands of people -they deliver compassionate support to people in their homes and through their specialist hospices and care centers.

ARTISTS THAT CAUGHT MY EYE-click on names for links to their websites. 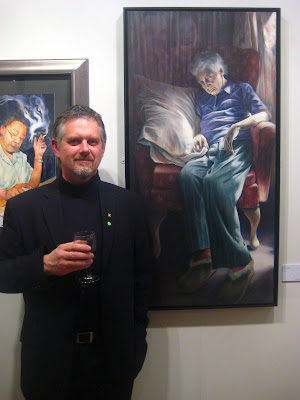 "A moment for Love"

First sight of this painting got my attention, the illumination across the figure coming from the upper right kept the whole piece in a transitive mood. Looking closer at the woman portrayed I discovered some younger faces in the background which wasn't apparent at first sight. It all has to do with the moment his sitter goes into her past. It was only later on in the night that Dan was able to recollect that he had met me somewhere before-it was on ITV's show, "Brush with Fame" he was one of the 10 finalists from London. It was a great re-union as we had not seen or connected since 2005.

This was the write-up for the painting-
"My painting depicts the mother of my partner Winnie, who is suffering from Vascular Dementia. Now, at the age of 86 she has no concept of time or place, who she is, who is her daughter, my partner is, or where she is.
Now unable to talk or communicate her feelings-which are still there as she often sobs, the only time she appears to have some respite from this living hell is when she falls asleep in her chair in her room at the Care Home, which is now the extent of her world. It is this time that I chose to depict, seeing her bathed in sunlight in her darkened room. Faintly depicted in the background are images of Win and her husband when they first married." 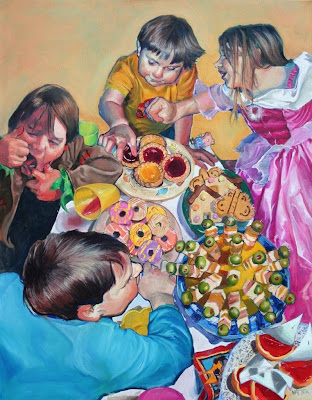 I was drawn to this piece by the colour and boldness of the figures depicted. I love paintings of children in activity or at play and this was a feast for my eyes.
The painting had a more somber tale to it-
"My little boy Max became seriously ill, brain damage was found 2 years ago, he is now at Great Ormound Street Hospital where they are trying to get his seizures under control. Painting him and his brother has helped me, I hope it helps others too.
When things get rough we have Unbirthday parties. We sing happy birthday to each other, eat terrible food, dress up and go to bed happier than the day wanted us to be. I'm trying to capture these moments." 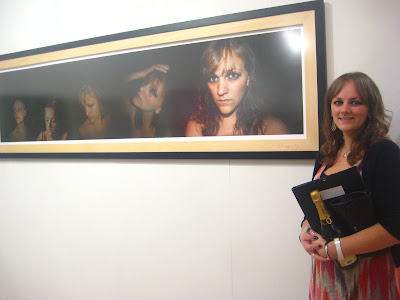 Her Overall Winning composed photograph caught my attention immediately I got into the Mall Galleries. It had a sort of mystery to it, seeing her at different stages of what was a recovery from Hodgkin's Lymphoma. I had a good discussion with her on the evening and she had this to say at the bottom of the painting-
"I was diagnosed with Hodgkin's Lymphoma 4 years ago when I was 18 years old. Art helped me deal with having cancer as well as coping with the emotions that I had pushed aside in order to get through the ordeal.
The title "two steps forward and one step back, two steps forward" is an indication of how time becomes measured according to fence posts such as "check ups". The "one step back" portion of the title refers to the centre image (2007)when at the time it was unsure whether the illness had returned, thankfully it hadn't. but it was still an emotional "set back" but the more recent 4th(2008) and especially 5th photos(2009)show a confidence through eye contact after years of shying away from people, no longer afraid to let people see who I am." 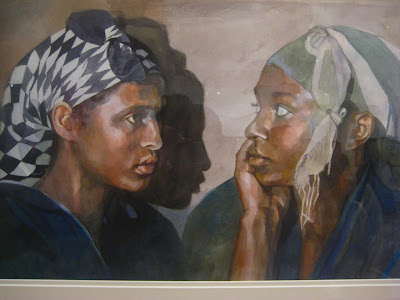 Sorry the picture is poor, I haven't been able to master taking pictures with glass framing. This was a delight to behold. Her handling of these two ladies who I later learnt they where bar girls at risk of HIV or AIDs in Addis Ababa. What I loved so much about the piece was the way she kept the transparency of the watercolour washes on the skin luminous and it still had an opaque presence of a richer painting 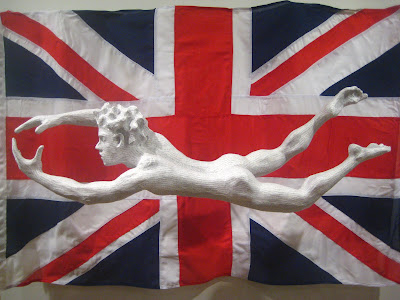 Just loved this for the sheer visual delight of thinking this man reaching for the prize was hanging in space without any attachment. Checking out his website revealed more beautiful sculptures of which I found interesting. 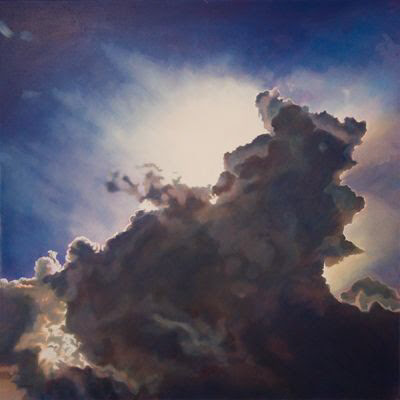 "Excuse Me, Your Silver Lining's Showing"

Her sky painting had mood- almost real!!!I checked he website to see more and I conclude she is a master painter of skies! 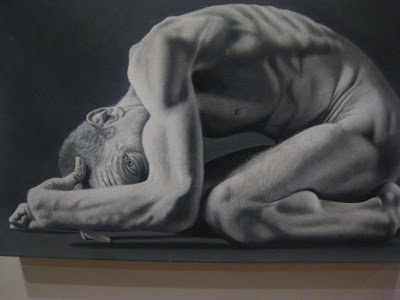 She won the Royal Society of Portrait Painters Award. I got hooked on this one because I loved the way she handled the anatomy of the man depicted-almost had a real feel of drawing with paint-something I have been trying to achieve but haven't been able to. 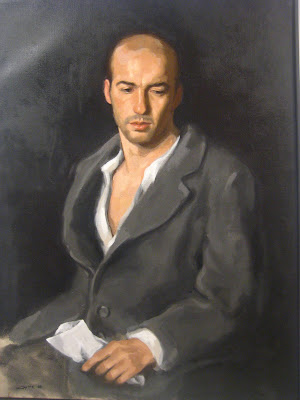 Loved this piece just for the simple, straightforward handling of paint in a classical way. He won the award for a piece done by an artist in Education. 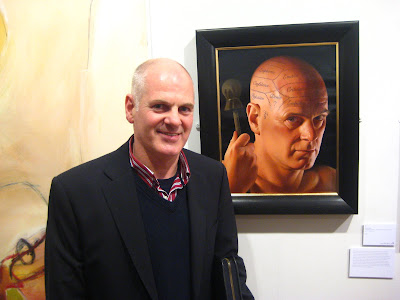 One of my best paintings of the night. It had great attention to detail and subtle colour shifts. David was first to notice me on the night, he said he met me on the Royal Institute of Oil Painters open Painting evening where he won the Overall Prize for the night. Click on his name above to see his finished portrait of Antonio Carluccio. He has also been featured in the International Artist Magazine where he was a finalist in one of their bi-monthly competitions.
Posted by adebanji at 11:05 am

What talent on display here. Thanks for sharing, I really loved the one of the sleeping old lady and the Fetal position. What medium is that?

Wow your choices are all so very good thank you for sharing them with us. Your piece is so full of 'flair and passion' and I'm so happy to see it sold right away. Congratulations

Thanks Myne, the medium is oil.