The Story Behind 40 works that changed my career 2

Continuing the works that changed my career this is Number 2. A painting called, "Internal Congestion"- This painting was painted in 2008 and it was around the time I had just left my full time job and was cruising into Art full time. I wanted to do a painting that captured the feeling one gets in a congested train during the Rush Hour. Also, I wanted to picture some people who would not really want to be close to each other on the train but couldn't help it because it's just the way trains are-you find yourself up someones nose and they are almost breathing down into you. 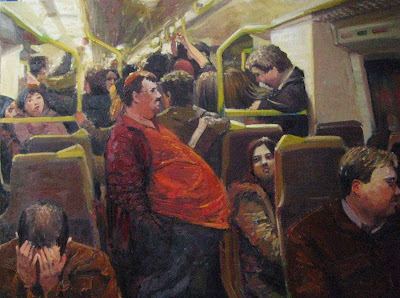 I always plan these compositions with a few snap shots of actual scenes, then I play around with some figures I'll want in that aren't in the actual photograph. The big man wasn't in the train, a girl was actually standing where he was, but I decided to replace her with him to make the painting a little more interesting.

I used a predominately brown, red and green scheme because I didn't want the numerous colours the people were actually wearing to clash. I wanted some sort of harmony within the whole picture and then I added a bright red on the man, who happens to be the centre of interest. It was quite weird having the centre of interest right in the middle, but sometimes it's good to break the rules.

One of my old Secondary School friends bought the work and is so happy to have it in his collection.

SPECIAL QUOTE
"Learn to work not from your head but from your eyes. Your real aim is to paint the light, not the thing itself. You have to train yourself to see your subject objectively rather than to identify with it, and to treat what's in front of you as a simple design problem-keys to good picture -making."-Charles Reid
Posted by adebanji at 9:55 am

You have me captivated!! Thankyou so much for sharing your thoughts and skill.Not to mention your beautiful paintings!

You have certainly captured the crush!