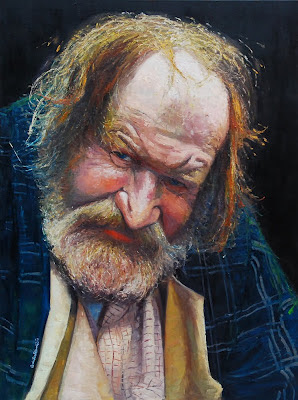 
This guy is one of the people I randomly meet on the streets. Sometimes it's just impossible to resist asking if a sketch could be done when one sees a face with so much character like this guy has. I saw him way back in 2009, I think, and after asking politely he agreed and that was it! I sat down to sketch him. He looked through my sketchbook later and said the sketches were quite impressive.

Last year I decided to do a big painting from a photo I also took of him, it's the first time I have done a "big head"- but I experienced so much freedom and liberation while painting it that I'm so sure if I have a bigger studio-I'll be doing more large works like this. Sometimes I would stand back and just pick up heavy colour mixed with Liquin Impasto and just paste all over the work.

This work made me know that we can never say we can't do something without trying! I was inspired by my studio mate Alex Fowler, as he was working on some large landscapes from smaller studies he had done from San Fransisco, that I said to myself, "I think I can do something like this!"-I mean something large. So I did it and now I am just waiting for more opportunities to do do large heads.....this one gave me so much buzz! 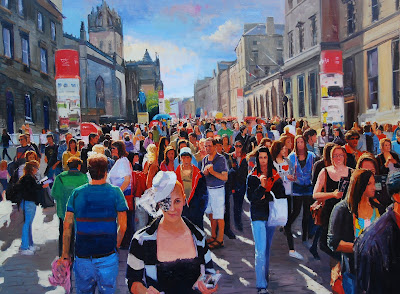 
This scene is taken from The Edinburgh Festival! It's such a wonderful time to be at Edinburgh....I didn't know I was going to see this scene when I traveled there last year. But when I saw it I took some pictures and decided to paint this one for the Edinburgh Art Fair last year and it was exhibited by Enid Lawson Gallery.

Works with crowded figures always give me a buzz, painting this one was a great experience because I was able to close in all the individual people and treat them as if they were people I knew. The architecture in the background was another highlight and as much I wanted it to show, this piece was all about the people and the buzz of the Festival! Controlling the reds was another challenge but I just managed to reduce the intensity of some spots with specks of green.

Completing this piece gave me the confidence to try an ever bigger one of these scenes, I always relish the challenge to push it a bit further!

SPECIAL QUOTE
"If you want to be successful, you must focus on what you can do, not what you can't"-John C Maxwell

that homeless-guys portrait is brilliant.

Your homeless portrait is absolutely amazing...you have some incredible paintings in your blog!!! Congratulations on this piece!!!