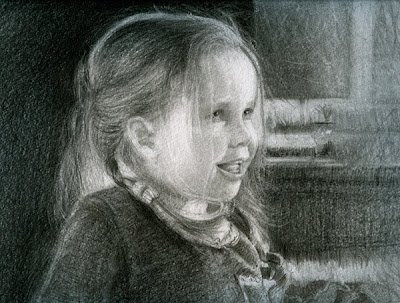 This drawing is part of a study I did for a an oil portrait commission of this little girl for her parents. Why I love it so much is that it was just a way for me to experiment and find out different parts of her features that worked well for the final piece. Among all the sketches and studies I did before the main portrait, this is the one I liked best but wasn't the one her parents chose. They settled for a more frontal view of their daughter. Looking back at this piece which is now part of my collection, I really feel it opened up for me a great revelation-which was the ability to really investigate a little more detail in a face with my best medium of all-GRAPHITE- I always feel the potential and celebration of the ordinary pencil gets overlooked. I think colour is powerful and for some reason gets more attention than black and white pieces. But I must say I love What the pencil can achieve and I believe a day will come that it would only work in black and white! 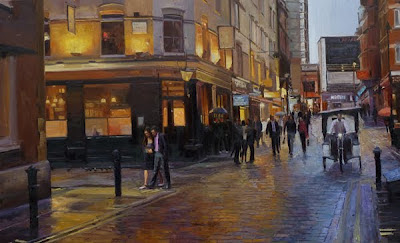 
This is a painting I did that was supposed to be a commission but the clients didn't have sufficient funding to give a go ahead. But since I had really given myself so much into doing it by taking almost 1, 500 pictures of the scene and trying my best to understand Rupert Street in Soho- Also with the encouragement of Enid Lawson, I went ahead to do this painting. My mission was the same as the requirements of the clients, to capture an evening scene at Soho, Rupert Street, with neon light signs, reflections and anything that reminds us of London-I decided to add the Rickshaw driver!

The reflections on the wet pavement was my key point in this piece. I had to study the work of Gustave Caillebotte, who painted a lovely scene of a Paris Street in Rainy Weather.
But what really got me absorbed in this piece was just going there whenever the rain had just fallen and there was a feeling of dusk in the air. There's so much power in just observing a scene and taking it in. It really helps in communicating the scene effectively when painting the scene in the studio. 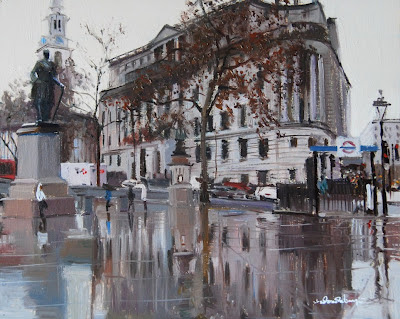 
This is another painting that deals with reflections, it's smaller just 10" x 8" but still communicates the same feeling. I really liked this one because although it was painted entirely from a picture in the studio-I really feel it had the qualities of a plein piece and the reason is, I painted it very quickly in Alla Prima as if I were just painting it outdoor. This piece sold in the Affordable Art fair last year at Battersea.


SPECIAL QUOTE
"I really feel whenever one embarks on a painting, one really needs to be totally absorbed in the piece , so that nothing will deter ones attention and energies in making the piece exactly what it was supposed to be when the idea was conceived or envisioned.- Adebanji Alade"

Email ThisBlogThis!Share to TwitterShare to FacebookShare to Pinterest
Labels: commission, graphite, landscape, oil base pencil, oil on board, oil on canvas, portraits, rain, reflections, The Story Behind 40 works that changed my career, urban life

Thank you so much for sharing your wonderful work and talent. I am still learning so much from watching your dvd.

All the best to you,
Joan

Thanks Joan and I am happy you are enjoying the DVD!