It was another great evening with members painting along side non-members. As usual we had three models to paint and the whole scenario was electric! 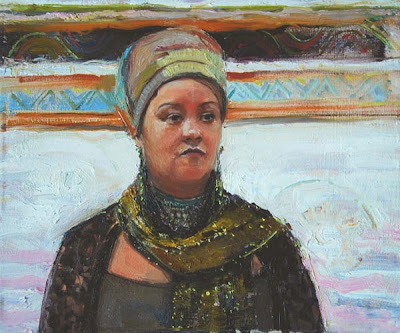 This is the finished version of the model I painted on the night.


Because of the weather this year we had to leave 40 minutes before the usual time, but that was no hindrance as the works produced were all great, with each having an individual touch in flowing alla prima! 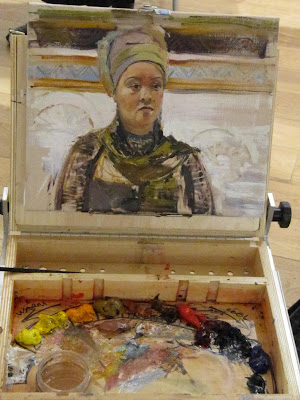 This is my palette set up for the painting above while in progress. I finished the rest at home from a photo.


These are few pictures taken on the night, I couldn't take as much as I used to, as time was against us. 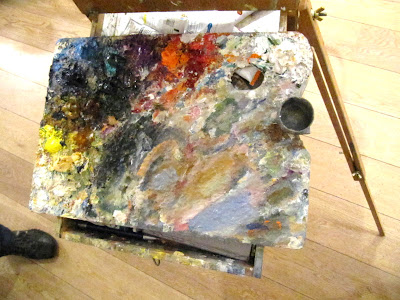 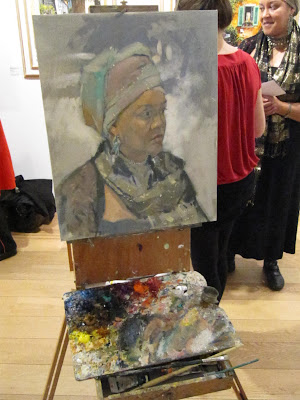 David's final stage of the model- I'm sure he'll finish up later on, like I did. 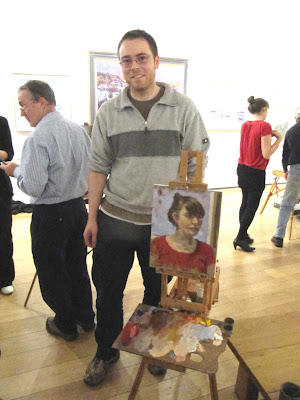 David with his winning piece for the night!! It won him £150 worth of Art materials from Winsor & Newton. Congratulations David!! This is another award well deserved! 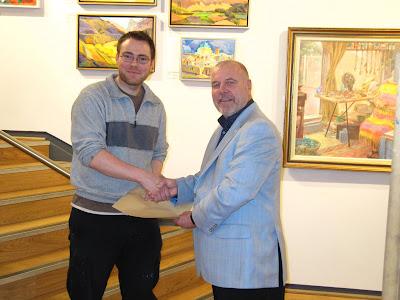 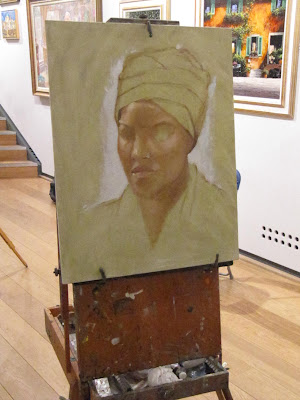 This is how it looked after 30 minutes, I love her gradual build up! 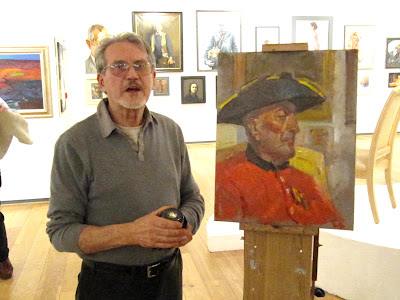 This is a smashing piece of 99 year old Chelsea Pensioner, Joe Britain by Bill. 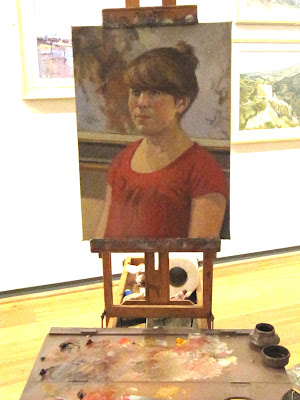 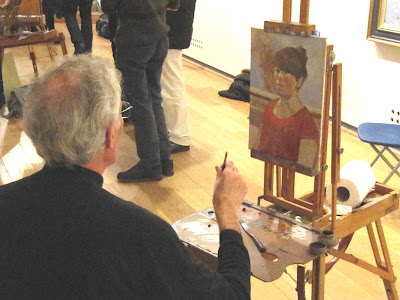 David at work. He is a perfectionist, even when working from life! 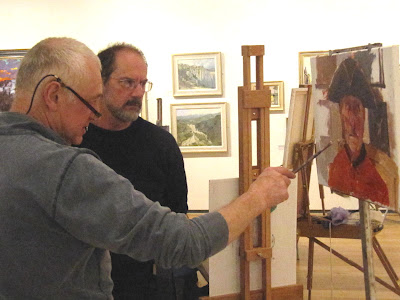 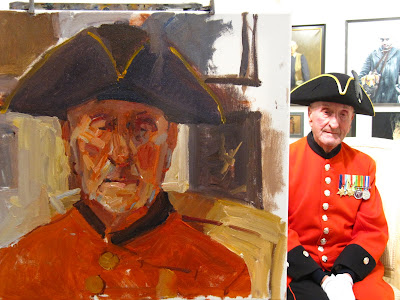 Roger knocked this off, only after 30 minutes!!!!! 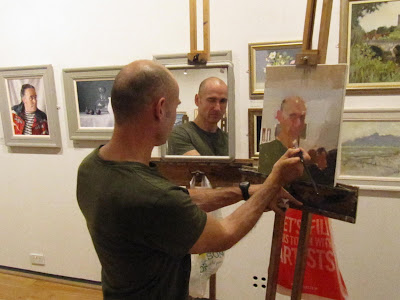 Luis working on his self Portrait-It was used for a demo earlier on the day. 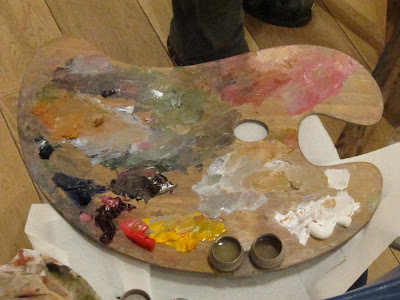 Luis Palette-note the number of colours- not so many, but he always produces loads of mixtures from this simple palette! 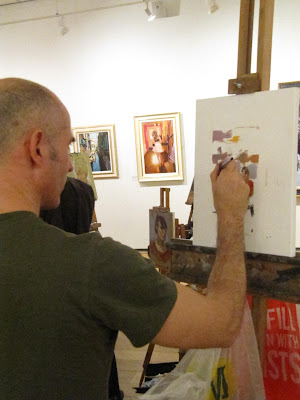 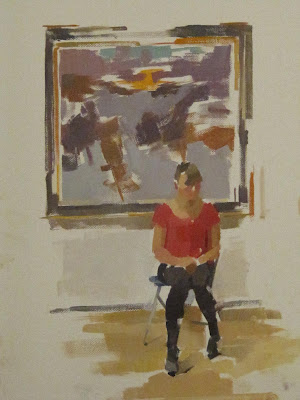 Luis' painting on the night-I love the sense of space! 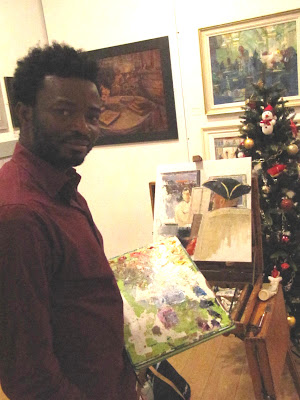 Titus with his painting 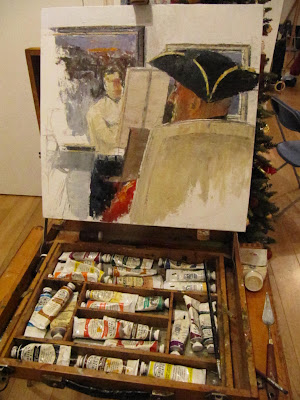 This is Titus' painting box- look out for those alkyd oil paints- he uses the fast drying colours- NB-He paints only with various palette knives. 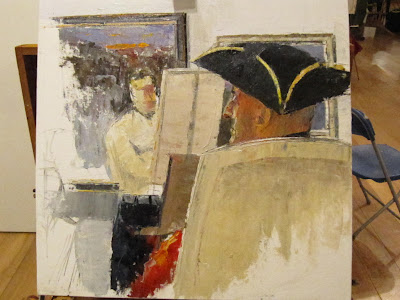 Titus' painting at the end of the session.
Posted by adebanji at 4:41 pm

I really get a kick out of seeing what artists on other continents are doing. Love this post. Your enthusiastic energy is inspiring!

Hi,
Thank you for posting these works.

Hello Adebanji,
Thank you so much again for this wonderful review. I have been a fan of most of the names mentioned in this post. Especially of David Curtis (both his watercolours and oils). Roger Dellar's painting is also beautiful. So striking and full of life. Each and ever work is fascinating, must have been a real joy to attend the event.
Your painting, as always, has come out very well. I am sure you have captured the likeness very well, because Mr. Curtis's work also gives an idea what the model must be looking like. Congratulations.
Thank you once again.

This is a great write up for a superb evening! Thanks for taking the time to put your photos and comments together. Your piece was a real cracker, capturing the likeness and spirit of the model.

The evening goes so quickly...so many paintings to see, techniques to observe and people to talk to. In between all that we try and paint a picture!! I wish there were more of these evenings....very inspiring.

What a great post! I really enjoyed reading it and seeing the excellent photos.

You are the best!

Thank you for the post. Very interesting to see other artists at their work.