This is my contribution to Vern's sketchbook. Its part of a Sketchbook Exchange I am currently taking part in called, "The Flying Moleskins" He said we could paint anything and around the time I was thinking of what to paint- It happened to be a time I was getting mesmerized by rain reflections on London streets. 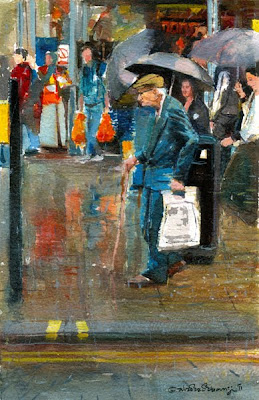 So I decided to do this piece of an old man I saw around Holborn in London enjoying the rain without an umbrella. Hope you like it Vern-It got me back to using watercolour and gouache.


SPECIAL QUOTE
" A prison in Bristol asked me to do a painting for the altar piece in their chapel and I did this big thing of the prodigal son; a father and son locked in embrace and the whole redemptive thing about that. While I was doing it I had a surveyor come around to look at the house-I was remortgaging it- and he saw the image and started crying. It was 9 o'clock in the morning and I was still in my pyjamas and he was in tears. He said: "What is that?" I said: It's a father and son. So he said: "I've got a 9 year old kid but I've never hugged him." Then he walked out saying:"I'm gonna find him." I called after him: "What about the house?"......-Charlie Mackesy

What a beautiful painting, and the quote is absolutely wonderful too. Thanks!

Thanks Ben! The guy who made the quote is an artist I love so much! His works are simply divine!

Thanks Earl, you've got nice works too

I love the colours of this painting-they glow! and you can really feel the rain in the atmosphere in this picture.

Adebanji, I love the painting that you did for me...and even more now that I can view it in real life.

You move people with your wonderful art, so I can see why your surveyor had such an emotional reaction to your piece.

Thanks Vern! The surveyor didn't react to my piece, he reacted to a piece by Charlie Mackesy.