This was the last challenge before the end of 2008 on Karin Juricks Different Strokes From Different Folks.

We were to paint each other and luckily for me I ended up being paired with (now I know) James Parker- He attempts to portray, on canvas, his concern and admiration for the other creatures on this planet, and perhaps capture the imagination of those that view his works. He doesn't consider himself an artist in the formal sense, but more of an illustrator seeking to uncover a bit of personality in the wildlife he paints.


This is the painting I did of him 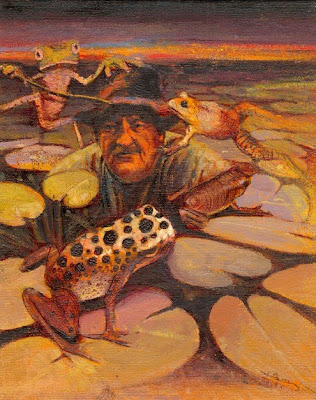 I was lucky to know what sort of art he does because he sent me a copy of his picture of me and a link to his site. I now used this information to tell a bit of a story of something that might happen, if he keeps painting those frogs......one day he'll go on one of his trips, seeking a new frog to paint and suddenly they'll set a trap for him and he'll be captured, just like he captures them brilliantly on canvas....This piece was done mostly with Acrylic, Biro and coloured pencils on Canvas Board

And this is the painting he did of me 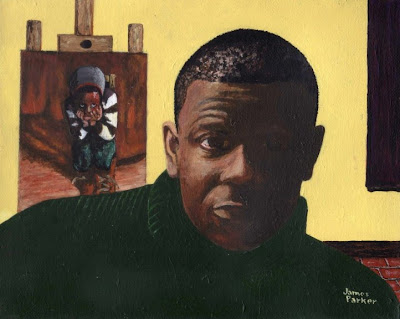 What a fun painting you did of James! To represent him in the way you did shows a lot of thought and hard work...well done!

Oh Adebanji! Your artist is going to love love love this. You included all his favorite things as he included your beautiful son. Artists have the biggest hearts I believe.

WONDERFUL portrait, Adebanji! You "captured" him BEAUTIFULLY with who he is. Plus it is a very fun painting! Bravo!

He made me laugh when I saw mine so I decided to make him laugh too!

Thanks Sheila! Hope he does!

Thanks Edward! Humour was at the back of my mind all the way through!

What an awesome painting you did for James! This is so creative. He must love it.

Thanks Akiko, hope so too, I am only keeping my fingers crossed!

Wonderfully done - I love it!! What fun:)

You have captured James and his frogs! Beautifully done!

Happy New Year to you and your family.

Hello Adebanji, I've admired your work for a long time now and commend you on your tenacity and skill in what you do. This painting is a lot of fun and keeps the viewer entertained as they enjoy a beautiful piece of art. You have inspired me to dig out a sketch book and some "biros" and have at it. All the best to you and your family.

Torrie Smiley, Wishing you the best too!

Thanks Vern! I am happy you are inspired to dig into your sketchbook, GO FOR IT, great adventures lie ahead!
Wishing you the best too!

DO you hear me laughing and smiling : ) , this is such a great portrait.
Adebanji, It is you that captures us with your talent.
Congratulations on the awards, all well deserved.

Adebanji! Another breathtaking painting! Just wonderful. I think that you and James have the best set of the bunch. Love it!

Thanks Dominique! Its nice to see you smiling and laughing! You know he has such an interesting face that I might try extra versions of it!

Thanks Carol! Your comments are highly appreciated!

Hola, Adebanji!! I'm kinda new at this Frogspot, er, Blogspot,, thing...Just set up Jamesparkerart a few weeks ago, and I don't know what's going on yet. That, and my slimy fingers keep sticking to the keyboard. I have 15 million great comments from my friends about your frogs and me...they love it. And so do I!! Keep up the great work....James

James, you are the funniest artist I have known in ages!!!!!!!

Hope to see more of you!

Hey! Keep up the good work too!

This one is wonderful as always! Your work is always a surprise and is always beautiful. I love the way you know how to look beyond the surface. You caught something of this artist's soul and sense of humour I think!

Thanks WITRAG! I always appreciate your comments!

I've just noticed the round of portraits on Karin's site is now mentioned in Charley Parker's linesandcolors.com !

WOW! That's a tribute to Karins hard and excellent work!