Sketch of THE BERIMBAU PLAYER, A4 sketch pad, coloured pencil, 2009 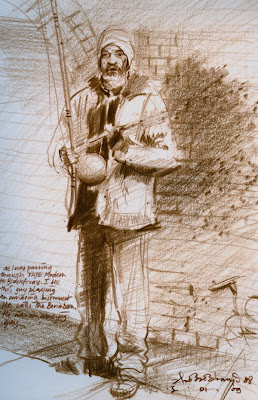 As I was on my way from the Bankside Gallery in SE1. I passed through an Alleyway near TATE MODERN and I discovered a rare sight: A guy playing a very strange looking instrument. It produced beautiful sounds with his cool tenor voice. The lighting under the Alley was great because there was also a fluorescent light which added to the drama. 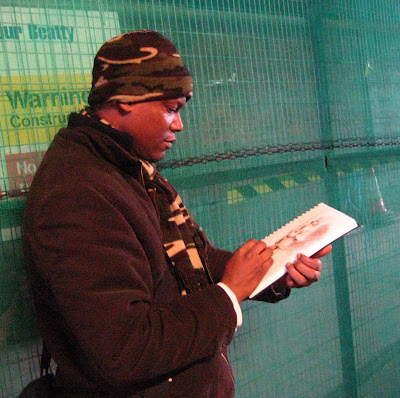 I paid homage to the musician made friends with him and asked if I could sketch him and he agreed! That was it! I endured the cold for about 25 minutes and got a sketch of him. He was pleased, gave me his e-mail address and I'll be sending this image to him too.

He said this instrument is called the BERIMBAU, GUNGA or HUNGU!

I'll be doing some more detailed sketches from this guy into my Emotion series and probably a painting too. I just loved the sight!
Posted by adebanji at 9:23 pm

You have a real talent combined with a great eye, I like every drawing you have posted, keep up the good work!

I hope you dont mind, but I have made a link on my blog page to your blog page, so that anyone visiting my blog could then visit yours, is this OK with you?

You are welcome Mike, this is highly sappreciated!

I love all your work, congratulations

May your sketching hand be always active.

Oh Banji, a part of your success is you innate ability to find those hidden treasures that are right in front of everybody but nobody has time to look at. I definitely think you should do a painting of this man.

I learned something new as I usually do from your blog. The berimbau is a Brazilian instrument. How cool is that! Keep up your wonderful work!

I really appreciate your comments Sheila and I will surely do a painting of this guy- He was simply MAGIC!

I learnt from this experience too, never knew about this before.In Africa the Hausas play a similar instrument called "goje" but it is more like a guitar.

Thanks for stopping by once again!

It is interesting Adebanji that you are choosing an other musician to add to your emotions series, and this one is worthy to be developed maybe there could be a sub group of instrumental in this series. MUsic does bring out many emotions in us.
I can't wait to see the results.

Dominique, you are right about music bringing emotions in us, this series will be varied, so once again, stay tuned.

I've also got another series going on AFRO HEAD GEARS which is also interesting, only you may not be too familar with them, but it will be a good learning experience too.

Wow...this piece is really stunning Adebanji!
I like your Jefferson Memorial image as well with our forefathers in it. Good job!