The Story Behind 40 works that changed my career 5

Some people may want to know why I am featuring these works. It's a way of documenting some of the works that I have done in the past few years before I celebrated my 40th Birthday in February. I'll be featuring these 40 works and some stories of how they were made, where they were exhibited and the effect they had on my career. 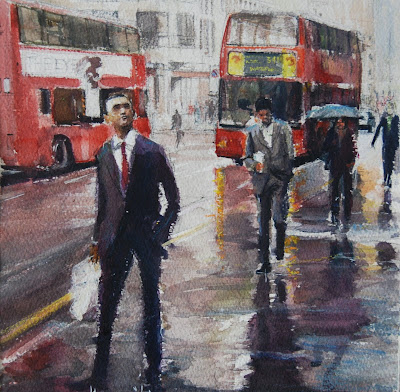 This was done mainly with watercolour, gouache, coloured pencil, wax crayons, and ink.

I worked with the piece purely as a watercolour to start with then my sketchy side gets the hang of me and I start making marks where the unforgivable watercolour fails me. These marks are made with coloured pencil, wax crayons and ink. Sometimes the watercolour paper gets too much of a whacking and I just have to stop or risk the piece loosing it's freshness and spontaneity. I remember while working on this piece that I kept on thinking I was actually part of the guys in the rain-I think this helps me to capture the necessary marks and strokes that relate to the scene.

This work was part of an exhibition I had in 2009 at St Stephen's Art Festival, Gloucester Rd in London and it was one of the works that sold on the first day. It was used as the front cover of the exhibition brochure. That's one of the greatest feelings when one has an exhibition!

SPECIAL QUOTE
"The beginning of a painting is a very energized, exciting time, and it generates most of the energy I have. If I've gotten 75 per cent of it down, then it takes an effort to really get up that kind of energy to finish it in the same way it's begun."- Burton Silverman
Posted by adebanji at 7:09 pm

I appreciate you sharing your working experiences.

You are welcome , Grey Brush!
It's also a way for me to remember how I worked on these pieces myself.

Thanks Sharon, I am glad you are enjoying it!

I really like this! I can almost smell the rain!