The Story Behind 40 works that changed my career 13


This painting meant so much to me because before this competition came up I had never set up to paint in the Chelsea area. Sometimes we don't seem to appreciate the area where we live or work and always look out to travel or paint somewhere else. But when Heatherleys and The Cheyne Walk Trust decided to set up the competition and auction in aid of a Bursary for Students at Heatherley's I was forced to paint around my studio area. The brief was to capture any area around The Chelsea Riverside and Cheyne Walk area. I entered two paintings-One I did on site on a very grey and rainy day and this one which was painted from a picture of the Chelsea Riverside from Battersea Bridge. Both paintings sold at the exhibition and this one won the Best Work in the show! I was really delighted because a few months before that I had just won the Plein Air Prize at the Bath Prize and this one really fired me up! It was this competition that really fired me up to take on my famous "Bath Marathon in 2010"-Where I painted 212, 6" x 8" paintings of Bath in 4 months-something I still wonder up till today, how I managed to achieve! But there's something very contagious about success and confidence-both become springboards to reach higher heights! 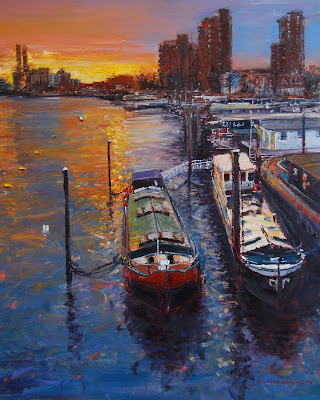 
The use of the digital Camera has become really important in developing some of these paintings. I learned so much from Karin Jurick, who goes around with a camera like a hunter! She comes back to the studio to produce some wonderful paintings-she always talks about not being a slave to the picture but being ready to use one's artistic shorthand to bring it to life!


Below are some pictures of the painting in progress and the award ceremony. 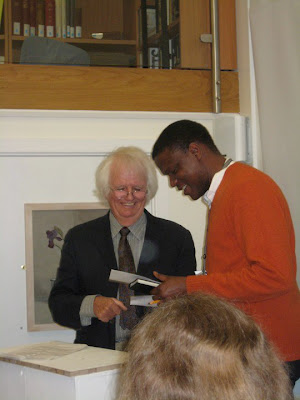 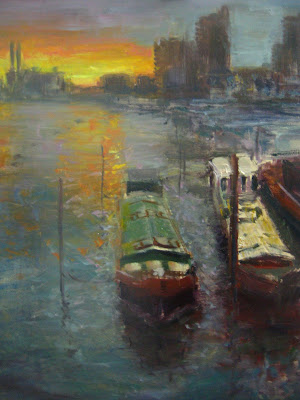 Getting the mood, half way through the painting

Even though the quote below is about writing-it applies to painting too!

SPECIAL QUOTE
"So PUT IT OUT THERE. Send your work off to editors and agents as much as possible, show it to your neighbors, plaster it on the walls of the bus stops – just don’t sit on your work and suffocate it. At least try. And when the powers-that-be send you back your manuscript (and they will), take a deep breath and try again. I often hear people say, “I’m not good enough yet to be published.” That’s quite possible. Probable, even. All I’m saying is: Let someone else decide that. Magazines, editors, agents – they all employ young people making $22,000 a year whose job it is to read through piles of manuscripts and send you back letters telling you that you aren’t good enough yet: LET THEM DO IT. Don’t pre-reject yourself. That’s their job, not yours. Your job is only to write your heart out, and let destiny take care of the rest."-Elizabeth Gibert author of Eat, Pray, love

Email ThisBlogThis!Share to TwitterShare to FacebookShare to Pinterest
Labels: chelsea, competition, exhibition, Heatherley School of Fine Art, oil on board, The Story Behind 40 works that changed my career

Nice atmosphere. Did JMW Turner paint this area too? Battersea I mean?

Thanks Grey Brush! Yes JMW Turner painted it, so did John Sell Cotman and James McNeill Whistler-it was a very popular at the time and still is now.

Yeah, I just Googled the subject. Quite a tradition. BTW my name is Steve.

Sure! Nice one, Steve!

That's the spirit, Sadami- that's all we can do!

Lots of happiness for your work, you are excellent!!!!

Thanks Mayra! To God be the glory!

The painting is stunning! I loved it the moment I saw it on your website last year. The award is so well deserved! Thanks also for the encouraging quote.
Best wishes,

Thanks Vinayak! I am glad you loved the quote!