The Story Behind 40 works that changed my career 17


This painting was done in some of the worst conditions and circumstances I was facing at the time I did it last year. Things were going from bad to worse and I struggled to paint this piece for the Chelsea Art Fair last year. I knew I could do a large painting full of figures but I was also a bit timid and didn't know how the whole thing would work out. To see how I went about painting this stage by stage you can click HERE. The stage by stage pictures do not reveal any struggle, sometimes when stages of a painting are shown it almost makes the painting process seem so straightforward and mechanical-nothing about the frustration, discouragement, despondency or sweat shows up and it is almost easy to say, "I could do that on any given day". I wish the painting process was that simple, probably my life would have been much easier! 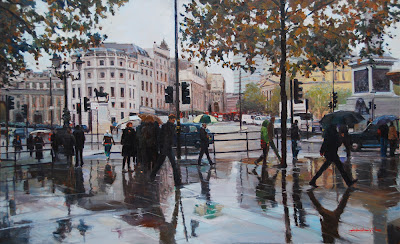 While working on this piece, my laptop packed up and at the time I was so low in funds, I couldn't even repair it. I was facing other rock hard issues in my personal life, the conflict was great! Then I decided to work from pictures and they were poor. Half way through I almost gave up. Then I decided to keep going. I'm so privileged to share my studio with two artists who always offer hope, constructive criticism and encouragement. This really helped as they corrected
many things that would have gone totally wrong with the piece while it was being executed. Alex Fowler NEAC(Painter) wasn't happy with the warm showing through from the under-painting and the architecture(I painted on a warm background) He said it didn't show the true feel of a rainy day. Richard Burn(Sculptor)wasn't happy with colour of one of the umbrellas-I made it what I saw, the colour of the Union Jack, but he insisted it was distracting the whole sombre and subtle grey mood the whole piece had. I listened carefully and altered these areas as I worked on the painting.

It was exhibited at the Chelsea Art Fair in April last and it didn't sell! I wasn't pleased at all and thought, oh no, after all that pain, no one wanted the rain! Then it was exhibited in June at a group show of London Paintings at Enid Lawson Gallery. It was used as the front cover of the exhibition catalogue and it sold on the opening day for £6,450. The couple who bought it were so pleased with the painting. They said it captured everything they felt London is on rainy days and the guy said he had worked around that area I depicted and his daughter was in Australia and he said I had included Australia House in it too, which he said, made it perfect for them! He said he had a son who exactly my age and was happy to see I was doing something great with my life.


SPECIAL QUOTE
"Sometimes the highs are really high and the lows are really low, but we just need to be prepared for every moment, because we can never tell what lies ahead!"-Adebanji Alade
Posted by adebanji at 6:41 pm

Email ThisBlogThis!Share to TwitterShare to FacebookShare to Pinterest
Labels: . people, exhibition, figurative, figures, london, oil on canvas, rain, The Story Behind 40 works that changed my career

WOW!! I love rain and I love this painting! I'm not surprised it sold for such an amount,to me its priceless.Again you prove that we as artists need to have faith and belief in ourselves,You fall down and you get up again and keep trying .Each time you get up you reach another level.Your forty paintings should be a book because it would contain many valuable lessons that artists would be glad of.I know I feel lucky to read about each painting.

Thanks Azra! Thanks once again for taking time to comment. Sometimes we are up and sometimes we are down! But we just need to keep moving!
I'm thinking about that, a book would be great!

Wow, just wow! I love your special quote at the end :-) Always words of wisdom from you!

Thanks Haidee-Jo, some have said experience is the best teacher! I think we learn faster from what we have personally experienced, but then in all to God be the glory!

Hanging in there and being surrounded by the right power and advice really did pay of. This is a wonderful painting with the best happy ending:D
Your talent is truly amazing!

Great & detailed work. It doesn't look easy to me (just look @ that stone-lion at the right, the trees & reflection of the water & so on). I know you are a mater when it comes to painting reflections on water....

well resentlly, my computer also crashed (I had to format it & now it has lost it bluetooth function lol)...


anyway, their is no life with out challanges. RESPECT!

Thanks Ife-Ka-I agree! The challenges are always blessings in disguise.