The Story Behind 40 works that changed my career 16

This painting was done for an Art Football Competition( I focused on the highest scoring player for Arsenal, Thierry Henry-He is one of the football players that played the game and scored goals with such flair and fluency- it was almost swagger like or should I use his words VaVa VOOOMMM!!!) but it got rejected, and you may wonder why it changed my career. Well, it was because of the rejection of this piece, that made me take on the next football competition that came up in which I featured an Arsenal Fan in Agony and Ecstasy. Sometimes one's work is rejected, it gives room for one to reflect and assess why it was rejected. So when the selected works were exhibited for the first competition, I looked and I noticed that none of the works selected had any focus on a real footballer but more of what football meant to the artists and photographers who took part. Learning from this rejection, I took on the next one that came up and I was a runner up! Learning from what we might term as failure can be very disappointing but I think the best way to deal with it and move forward is to get feedback. Feedback is very important, a readiness to accept criticism, a readiness to accept what went wrong and a readiness to deal with the ego that plagues most artists-It's that feeling we have kind of grown up with , the feeling people have put into our subconscious way back from the times we were in Primary and Secondary School. Those feelings that we are the best! That we are so talented! And that we are always going to excel. Then all of a sudden we get into the real art world and we notice a difference!¬ We put work into juried shows and we get rejected. What's our first reaction? They don't like me, they don't like my name, they don't like my style, they are biased, they only favour a group of people......We could go on!! But the bitter truth normally is we are rejecting the path of failure, which if turned inside out will produce success! 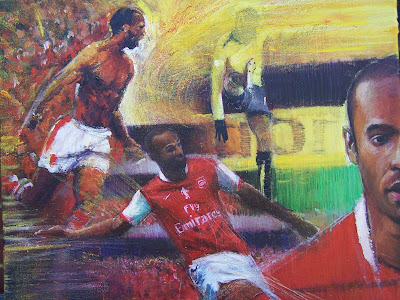 
Looking at this piece there's nothing wrong with the piece, but without me going to the exhibition of selected works for feedback, I would never have known that they didn't want works that depicted actual football players. So, like I mentioned in some of the earlier posts in the stories that made my career, I'll say it again,. The rejection may be because the work doesn't suit the criteria of the exhibition, and this was clearly my experience with this piece. I hope I can keep reminding myself of these things because as humans we are prone to forget.

SPECIAL QUOTE
"Be humble. Realize that you're not that good. There are 10,000 artists living that are better than you. There are 100,000,000 in art history that are even better. Feel good about what you do but don't lose sight of this reality. Challenge yourself to do things you don't think you can do, either out of fear or lack of knowledge. Expose yourself to ALL kinds of art- painting, sculpture, film, furniture design, illustration, architecture, animation, etc. Ask yourself WHAT and WHY you like certain aspects of your favorite art pieces and allow that to nurture, inspire and motivate your own work. The artists' ego is his/her own worst enemy." -Shawn Barber

You have given me alot to think about! I felt exactly everything you say when I was rejected.The difference is you kept submitting your work and I hav'nt since October last year.Rejection is so very hard to take but I think with your lessons it will be easier next time!

Thanks Azra, it is a hard one to swallow, I can't count the number of times I have been rejected, it's life! I'm happy you've caught the spirit!

You are so right and it's so easy to be dispirited when your work is rejected from an exhibition. Reading your words over the last few weeks has made me realise all the times over the years that I have resigned paintings to the shelf because they haven't been juried in to an exhibition, without even THINKING of entering them somewhere else! Without giving them a second chance!
I am gradually changing my ways though and here's an example- the same painting that didn't make it through to the RP exhibition is the one that has won me artist of the year! You just never know. As you say, you've got to keep plugging away. Take it on the chin! :-)

Haidee-Jo- thanks once more for sharing this. It's just the way life is! I am really happy about your SAA Award!!! Keep up all the hard work- it pays!!!

Thanks Jennifer! You are welcome!