The Story Behind 40 works that changed my career 15

This painting gave me a great leap, I mean a great leap towards plunging into Art full time. It was painted slowly and carefully for about 6 months or so, combining it with my full time job at St Mungo's, and being a new father of a little boy who was only 1 year old at the time. I was painting from a really bad picture, that wasn't clear at all, so, I kept on inventing all the time. All the faces were derived from my sketches as it was a full motion picture without any detail. I remember taking this picture during the Christmas Rush Hour the year before. 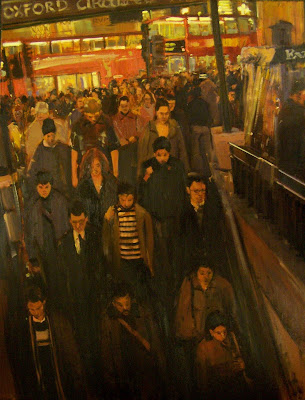 I remember going to the Royal Institute of Oil Painters Annual Exhibition in 2006 and I watched as they gave out the prizes to the Under 35-Young Painters category sponsored by Winsor and Newton, and I looked at the quality of the paintings and I said to myself, "I can see why I didn't get in." One of the paintings I submitted that year was marked "D"(Which means Doubtful)- which was very encouraging!!! I said to myself, "If I can get a D with this painting, then if I put in triple this effort, I might be able to get in next year!" 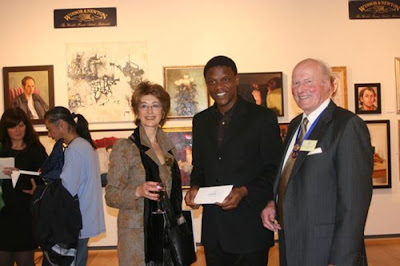 Then came 2007 and I put in 2 paintings, I was so desperate, I didn't even frame them. But I believed in them. When then results came out. One of the paintings got accepted and the other rejected. I was so pleased! But that wasn't all, I later got a call that I had won the First Prize in the Under 35 Category!!! Now that was the last time I could put work into this category as I was 35 at the time. I couldn't believe it. But that wasn't all, they called me to get the work professionally framed and bring it back in time for the Annual exhibition. This work won me £1,000 worth of Art materials from Winsor & Newton and a week into the exhibition someone bought the painting! That was a great year for me because prior to that I had won another competition organized by Winsor & Newton but that was a Watercolour One! All these little strides kept pumping me up for the great leap in 2008 and looking back, I have no regrets!!!! 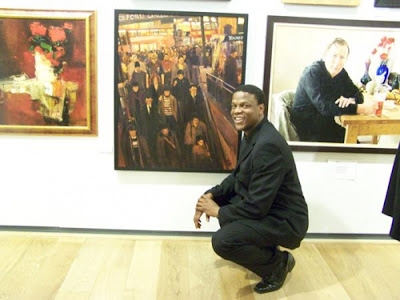 
SPECIAL QUOTE
"Nothing in the world can take the place of persistence. Talent will not; nothing is more common than unsuccessful men with talent. Genius will not: unrewarded genius is almost a proverb. Education will not: the world is full of educated derelicts. Persistence and determination alone are the omnipotent. The slogan "Press on"has solved and always will solve the problems of the human race"
-Calvin Coolidge
Posted by adebanji at 6:58 pm

Email ThisBlogThis!Share to TwitterShare to FacebookShare to Pinterest
Labels: figurative, oil on canvas, people, rush hour, The Story Behind 40 works that changed my career

You story is truly inspirational!!

That's wonderful! The ROI has always been particularly dear to my heart. I would be so so happy to if I ever made it as a member. Big dream! :-)

Haidee-Jo- thanks for your comment, all I'll say is, IT IS POSSIBLE- you are able!!!!!