The Story Behind 40 works that changed my career 9

There are some paintings that bring one the sweetest memories. Paintings that bring one complete satisfaction and joy. Paintings that one looks back and knows, "I did the hard work here, I tried my best and did all I could to make it happen!" If there's a painting that brings me that kind of feeling-One of them is this one, "RUSH HOUR IV"- I painted it over a long period, I'm not sure precisely but it was a matter of months. It was the year I left my job with homeless people, took the risk and launched into the art world, the unknown! Looking back, sometimes I think I was a complete fool, but then sometimes it takes some "utter foolishness" to take risks, I took this risk just when the Credit Crunch was about to explode and I never knew how I'll make it, but I thank God today, that I am still standing! This work was one of those paintings that I embarked upon just after making that decision. I really wanted to challenge myself, I really wanted to do something I hadn't done before, something out of my comfort zone. Previously I had done 3 rush hour pieces but none of them had really been on this scale. The nearest to it was Rush Hour II, but with this one I planned to make everyone's face in the painting a portrait, as if I was commissioned to paint them. Yet I didn't want it to be detailed, just a good impression with nice shapes of colour temperature and value. 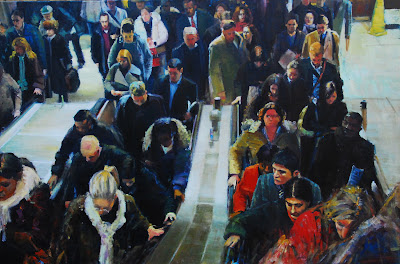 
Some people may ask, "How and where did I see this scene?" Well, I was on the escalator at the time at London bridge and I think there had been a terrible incident at one of the main stations, there were delays everywhere and the whole place was jam packed with people not knowing how to get home at the peak of Rush Hour. I just seized the opportunity to take a few pictures and I took a shot of this scene as I normally do, keeping them just in case I'll need a good reference for a painting. It was later while looking through my pictures that I thought about using it for a painting.

I have also decided to show the abstract design for this painting so it shows how I start off some of these paintings. It has an under-painting done with acrylic out of which the figures emerged by painting them from the reference picture shape by shape. 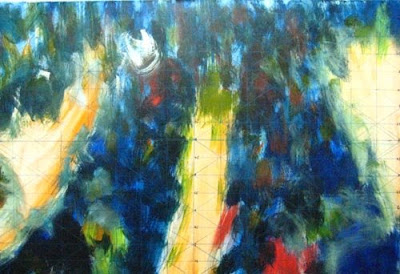 This piece was submitted into the Threadneedle Figurative Open Exhibition at the Mall Galleries and it wasn't accepted. Then I submitted it for the Royal Institute of Oil Painters Annual Exhibition in 2008 and it got accepted, not only did it get accepted but it got hung in the main gallery next to The Presidents painting of the Mayor of London with transport now and way back then! That was a great feeling! It then got sold at The Edinburgh Art Fair by Enid Lawson Gallery in 2010 by a couple that are still thrilled to have it in their collection and they recently bought another painting I did of Big Ben in London.


SPECIAL QUOTE
"It's just always a good thing to keep believing in oneself, keep working on ones weaknesses and just to keep dreaming. It's a painful road of ups and downs but if one gets that feeling of a "never say die" attitude-then the road just gets brighter and better!"-Adebanji Alade
Posted by adebanji at 6:21 pm

Email ThisBlogThis!Share to TwitterShare to FacebookShare to Pinterest
Labels: London Bridge, oil on canvas, rush hour, The Story Behind 40 works that changed my career

Your various crowd paintings remind me of time-lapse film scenes of people flowing from one place to another. Process and pattern expressed with paint. Cool. I hope you do more of that because painting crowds seems to be one of your strongest talents.

Thanks Grey Brush- Yes! I have some lined up! I love the crowds. While painting them I just love the fact that I can sit back and watch each figure pop out from no where, it's all about the element of surprise as each one comes to life!

Thanks for sharing your method of working and your faith and belief in your self is especially inspiring because in the end that is what gets you through,not to mention the talent of course!

Hi, Adebanji,
Thank you for sharing the wonderful work, the precious info and the so nice encouraging say!! Yey!
Cheers, Sadami