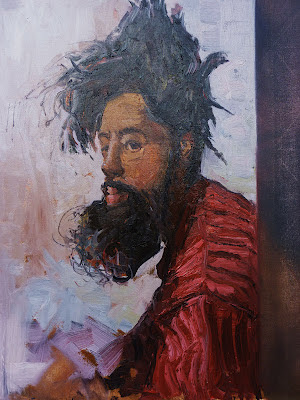 The whole story about this one can be read HERE- It was a painting I did entirely from a sketch of a Homeless guy I saw on Kings Road last year. I used the Zorn Palette (Whiite, Cadmium Red, Yellow Orche and Ivory Black) and it was done Alla Prima. I worked in full concentration as I didn't want to miss any bit about his face that I was trying to recall from memory. The greatest temptation was not to overwork it but just leave it fresh with all my first-hand strokes.

I still look back at this piece in awe at the sudden striking of inspiration that can hit us as artists at times when we are just fully absorbed in our work. The day I painted this piece was just one of days I never really had a plan but at the back of my mind was a deep desire to capture this guy, whose face speaks a thousand words. I even wrote a poem on this piece which can be read HERE

The work sold at the Royal Institute of Oil Painters Annual Exhibition Last year at the Mall Galleries. 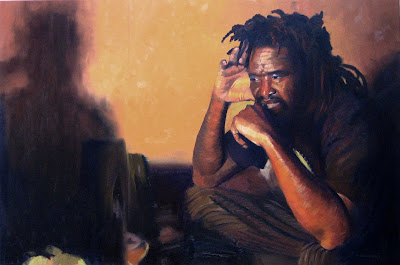 
This painting is of one of my great friends. I met him years back while working at St Mungos He was a brilliant guy who could make anybody happy with his funny jokes and expressions. What brought about this painting was his story of his participation in the Angolan War. He was a soldier and had some weird experiences on the battlefield, these experiences would often haunt him at night while alone in his room. He would explain vividly how these affected him. So I decided to put this experience in to a painting. I decided to call it Creep- As they were kind of creepy feelings coming in the form of dark shadows to cast their effect on his mind.

He really loved the work. I did too! One of my good friends from Secondary school who saw my talents at an early stage way back from 1983-89 bought the work from me. He said it encapsulates a powerful mood that affects every human being. The effect our past has on us!

The picture below shows me in a reflective mood too, with the painting. 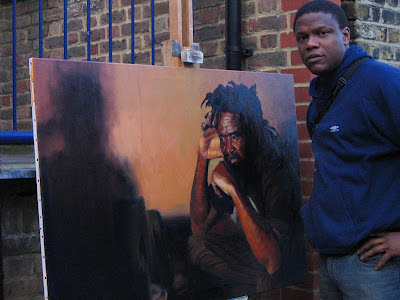 SPECIAL QUOTE
"You can easily judge the character of a man by how he treats those who can do nothing for him." (Johann Wolfgang von Goethe)
Posted by adebanji at 1:44 pm

Email ThisBlogThis!Share to TwitterShare to FacebookShare to Pinterest
Labels: exhibition, figurative, homeless, oil, oil on board, oil on canvas, people, portraits, The Story Behind 40 works that changed my career

Hi, Adebanji,
Thank you for sharing the precious work and stories. I always learn lot from you. Actually, your posts encourage/inspire me so much.
Kind regards, Sadami

Thanks Sadami, I'm glad you are enjoying these posts.